Earlier today the Google Blog went 404 (The code for a 'Page not found' error) Running over to Digg a couple of minutes later…sure enough I spot a story about some claiming the Google Blog was hacked.

There is a AIM conversation between two people about the 'hack' (one the "hacker" and the other his friend) and also screenshots of the hacking process. I'm not entirely sure as to the validity of this story but it is indeed true that the Google Blog was offline for a while. A student from Austin, Texas got a 404 error and tried registering the googleblog on blogspot and was immediately rewarded with a new blog with the name 'googleblog.blogspot.com' Technically not a hack, just someone who managed to capitalize on Google's screw up.

Om Malik posted about this on his blog Giga Om but it was quickly taken down. Reason Unknown. I just managed to grab the screenie. 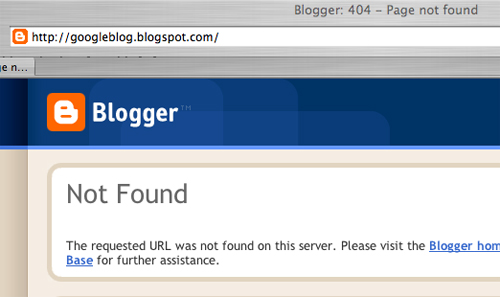 More info as it comes along.

Edit #1: Google Blog has a short post about this problem.

The Google Blog was unavailable for a short time tonight. We quickly learned from our initial investigation that there was no systemwide vulnerability for Blogger. We'll let you know more about what did happen once we finish looking into it.

Edit #2: Another update from the Google Blog. It seems they found the problem :p.

Update: We've determined the cause of tonight's outage. The blog was mistakenly deleted by us (d'oh!) which allowed the blog address to be temporarily claimed by another user. This was not a hack, and nobody guessed our password. Our bad.